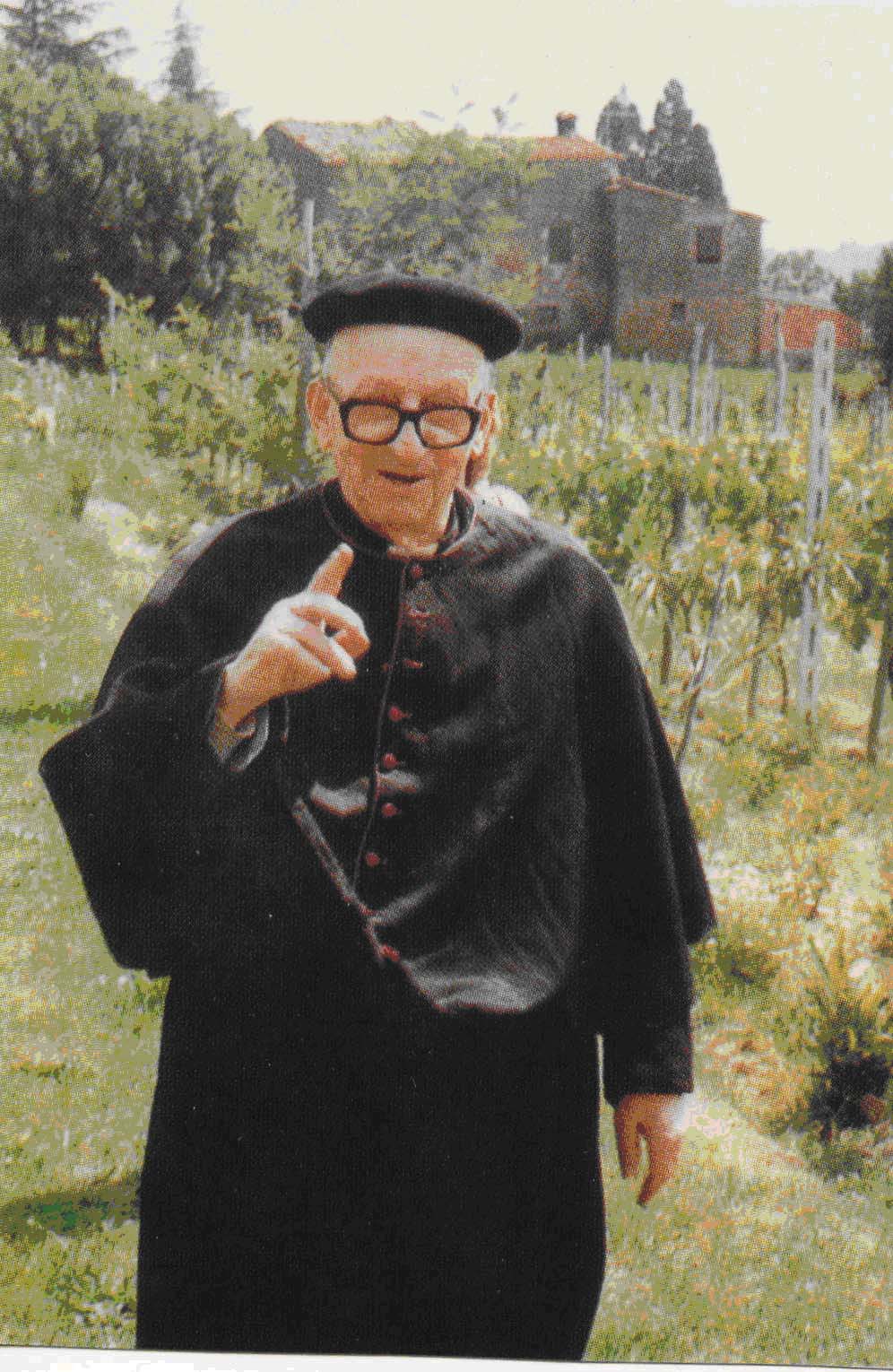 “With you I have met serenity.
Today I still embrace it
With the desire to live”
Frank Predieri

This gift comes to you
from the Sky:
Don’t leave it forgotten
In a drawer or to the dust
Of a shelf.
After having read it
Give it to those who need it
This is the desire
Of the one that, from the Sky,
has guided me for its
layout and realization.

In a technological society such as ours, that has thought us to have an explanation for everything that surrounds us, it seems that there is not set for miracles. So when we come upon events whose origin don’t appear justifiable by the knowledge in our possession, we not only remain surprised, but we often end up to ridicule or remove them from our mind. The world – as we know – is full of charlatans and maniacs that try to attract the attention of the unprovided ones to draw personal interests, even selling off coarse mystifications of truth and ‘inflating’ episodes that otherwise would not have anything of exceptional. Considering such reprehensible behaviours, it is developed, in various measures, a certain distrust toward those who speak of parapsychology and para-normal phenomenons or, however, of events that transcend the human experience. I too admit to be enough sceptic in this sense and that sometimes I look at certain episodes with hypercritical spirit. Nevertheless, it is impossible to deny that around us inexplicable facts sometimes verified. I hold therefore useless and pretentious to liquidate everything simply saying “I don’t believe it” or “they are all lies”, especially when stories like the one described in this book are proposed to us. Then we should just remain in respectful silence.
More than a story, however, this book is a friendly talk, through which Franco Predieri recalls the stages of his dramatic history and the meeting with he who he defines his “savior”, Don Angel Fantoni. The form is very simple, almost colloquial, so much that to the reader it seems to be in front of a friend
that, with great serenity of mind, makes him participate to his deepest emotions.
It is an action of love and thankfulness toward a “special” person, that has helped many suffering ones through his unconditional altruism and dowry.
The author in fact speaks to us of his prodigious recovery from a serious illness, diagnosed with a spine-chilling clarity by the physicians, which about thirty years ago without half terms, had preannounced his imminent end.
Predieri still has the whole sanitary documentation from which it emerges that, in that terrible period, he himself considered his own ineluctable death sentence. If one can exclude all of the possible natural explanations of his recovery, it will not remain other than to speak of a miracle – work of a saint.
But is “holiness” possible in today’s life? “The spiritual qualities are visible as far as the mountains of the Himalaya” as is read in the Dhammapada, the Buddhist Gospel. Nevertheless, so not to risk to shipwrecked among the disarming superstructures of our century, we should strive ourselves to change the key of reading of reality, paying attention, for example, to certain meaningful coincidences, that we often neglect. Concluding, we think, therefore, that man is more complex than how he appears and that the “inside” the is not so uprooted from the “outside”.

I have decided to publish this book to show gratitude and thankfulness to he who I retain to be the most important figure of my life: Don Angel Fantoni.

Here on Earth, he has been a father to me, a true father, and I owe him my return to life.
In this book it is narrated my miraculous recovery and it also tries to illustrate the figure of an extraordinary priest and charismatic.
Around thirty years ago, when I was about twenty-year old, I seriously got sick and it was diagnosed me brain cancer. For everybody, I was sold out and even my last rites / extreme unction was/were imparted to me.
I was suffering too much, and I attended death to come with anxiety, almost as a liberation, when God wanted to put me in the prodigal hands of Don Angel Fantoni, that slowly brought me back to life, pulling me out from the darkest desperation and moulding me into a new man, both outside and “inside.”
I will also try to illustrate some sensations that I have felt in youth and that have somehow “prepared” me to meet Don Angelo.
My writing doesn’t have any literary claim and I’m not searching for personal merits or prays that, sincerely, don’t think to have.
However it’s strong in me the need to remember – or to present – the figure of this humble and good man, an authentic servant of God that has dedicated all of his life to fellow men.
It’s not easy to describe the personality of Don Angelo or it’s not easy to speak about it and others before me have done it in a more admirable way.
One of those has been Don Redento Becci, a priest himself that wrote a book in 1983 “il fluido di un prete di montagna” (The fluid of a mountain’s priest), in which some prodigious testimonies of recoveries were brought upon, among these mine.
I would like to quote a phrase that Don Redento has written in his book and that touched me: “A new publication on Don Angelo would be useless and empty if it didn’t pursue the goal to illuminate, to build, to turn into good those that read it.” 1
And it is really this purpose that I appointed to myself. With my modest work, I desires that those that don’t have the fortune or the opportunity to know of him get to do so and, more important, to bring some hope in the hearts of those people that are surrounded by the deepness of the dark as it has been for me once.
God is distributor of every good and as He has let me to meet Don Angelo He can help whoever to raise again from an illness both physical and moral, and to put him on a good road where one can meet the people that can radically change life.
1 R. BECCI, Il fluido di un prete di montagna, Marciano, (PG), 1983, p. 20
Nevertheless I hold to specify that, despite this good and benevolent priest has helped bringing me back to life, the real and only craftsman of my recovery has been the Lord.
Don Angel has been the mean, the extraordinary way that God has used to realize his marvellous works, but, as such, we must be thankful to him that has dedicated his life to the good of human been, without never forgetting this great and absolute certainty: it is God that does miracles.
It was Don Angelo that always repeated me this lesson just because he saw my devotion to him.
“I am not nothing and no one!”, he loved saying with holy humility; and in respect and thankfulness to his person I confirm it because this fundamental truth will be clear to you.
Today, for divine grace, I still feel, inside me, its powerful and secure voice that recommends, scolds and it reassures me.
What a stupendous comfort for me!
I don’t know how to show it and many won’t believe me.
I understand very well such incredulity but, as I love to say, for everyone arrives a moment in which a point of view can be modified by knowing and looking at new and constructive experiences.
And whether you believe me or not, Don Angelo, from the stupendous dimension where he is now and where the endless light of God is resplendent, has suggested me to write this book and to give it to all those people that, animated by a lively interest, desire, through my experience, to deepen such delicate and fascinating thematic.
I have received much from God through his Angel servant and all was free.
Today I also desire to give something in Their name. I could now quote a sentence of Matteo’s Gospel: “You have received free and free you should donate.”
What I do is little thing, but consider that these pages have been written using hands and eyes that I should not have, and all thanks to Don Angelo.
In fact, when I first met him, on December 9th 1971, I was dying, almost blind and half -paralyzed since I not only had cancer but also sclerosis with plates.
Almost thirty years later, even if I use crutches, I can walk and I feel happy.
I’m firmly convinced that Don Angelo is still close to those people he helped during his terrestrial life, but he is also ready to give his help to all those people that ask him to intercede for them with God.
Thanks to this extraordinary man that has honoured me with his long friendship, I bless today those terrible moments in which I saw myself irremediably lost and to which I have been able to give a sense.
I saw death standing by me and this has been for me a sublime lesson of life.
I’d like to conclude repeating to you all what Don Angel has thought me: “don’t ever despair, but always say “is Your wish done”.
The author
My sincere thanks to the Ms. Maria Fantacci, Aurora Puccetti, Elizabeth Piccini, Gabriele Mangiacane, that with theirs disinterested collaboration and generous friendship have made the publication of this book possible.